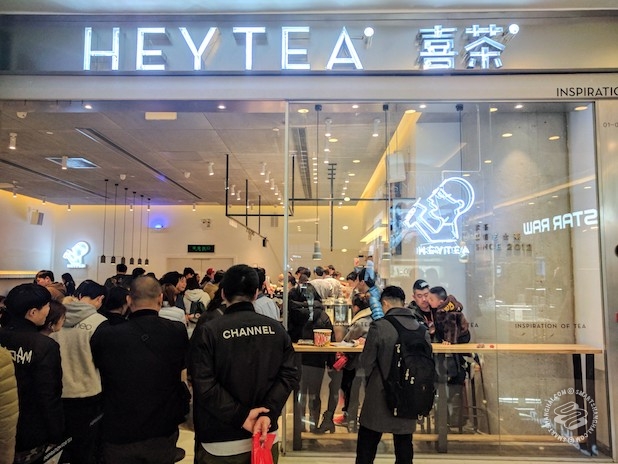 By making premium a previously basic drink in China – milk tea or bubble tea – and  by creating a buzz on the Internet, several new chains specifically target the millennials. One of them, the Heytea chain, seems to stand out.

Ifanr, a Chinese media on WeChat aimed at a readership of ‘trendsetters and early adopters of new lifestyles’, published a series of three articles focused on Heytea, the chain of tea-based drinks. ‘But why are you willing to stand in line for 4-5 hours for a Heytea drink?’, ‘Milk tea: how the upmarket move of the drinking habits among young people is linked to the economy of the attractiveness index ‘, ‘ With its rising popularity and its beautiful shops, is Heytea still far from Starbucks?’: these titles speak for themselves and make you want to know more.

Founded in 2012 in Jiangmen in the Guangdong province by Nie Yunchen, a ‘jiulinghou’ (90 后, born in the 1990s), Heytea (originally named HEEKCAA, and then Heytea for phonetic convenience) currently has more than 50 stores mainly in southern China. The chain announced in August 2016 having raised CN¥ 100 million (US$ 14, 5 million) and opened its first store in Shanghai’s Raffles City in February 2017. The long lineups attracted the attention of the local press which has taken an interest in the revival of bubble tea. A journalist with Smart Shanghai information website tested Heytea drinks and describes his half-hearted impression.

For its part, Ifanr seems fascinated by these long queues « of teenagers and youg people in their twenties who use their smartphones and take selfies. » For the authors of two of the three articles, it is a tactic to cause the buzz on the Internet and transform Heytea drinks in ‘wanghong’ (网红, Internet Hotties). Index of attractiveness is skyrocketing and the coveted product gains value. Far from being put off by the long hours of waiting, the customers then join « a ceremony of consumption which is akin to a pilgrimage », the article analyses.

« If after the visit, they get enough Likes on social networks and Weibo, then the experience is worth the wait”, continues the article, even wondering if Heytea did not go so far as to pay people daily to feed the lines. For Ifanr, these never-ending quest for approvals, fear of missing out and dread of rejection are key characteristics of Chinese youth. « They are the engine of the economy of the index of attractiveness that results ultimately in a premiumisation of consumption, currently the most common expression to describe the middle class. »

The third article, on the other hand, argues that these long queues reflect rather a ‘demand exceeds supply’ problem « to be addressed urgently. » « These weaknesses in the supply chain, and the lack of loyalty program on the Internet, show that compared to Starbucks, Heytea is still in the process of development », states the author.

The commonalities between the two chains are, however, numerous – medium-high range positioning, good location, sophisticated decoration, standardization that guarantees the quality of products in all stores, menu that follows the seasons – and the profitability of Heytea is even superior to that of Starbucks, says the author.

But the road is still long if Heytea is to become, like Starbucks’ concept, the ‘third space’, which is the privileged place to spend time away from home and work. « These long queues and crowded stores do not allow to create a relaxing atmosphere »,  says the article which notes, however, the recent effort of Heytea with the opening of a three-storey Heytea Mix in Guangzhou (with more than 200 m2 per floor). First store of the chain to offer solid food and to extend over more than one floor, the new store displays an art exhibition space in the third floor.

« Heytea is facing many challenges before being able to play in the same league as Starbucks, concludes the article, like for example the conquest of northern China who does not like sweet food. »  Nevertheless, the author does not incite Heytea to find another model, or to innovate by itself. 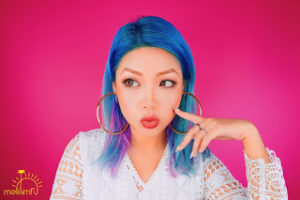 Melilim Fu, Beauty Vlogger : “In China, content quality gives you an edge”
Is working with influencers on social media a good solution…
Chinessima