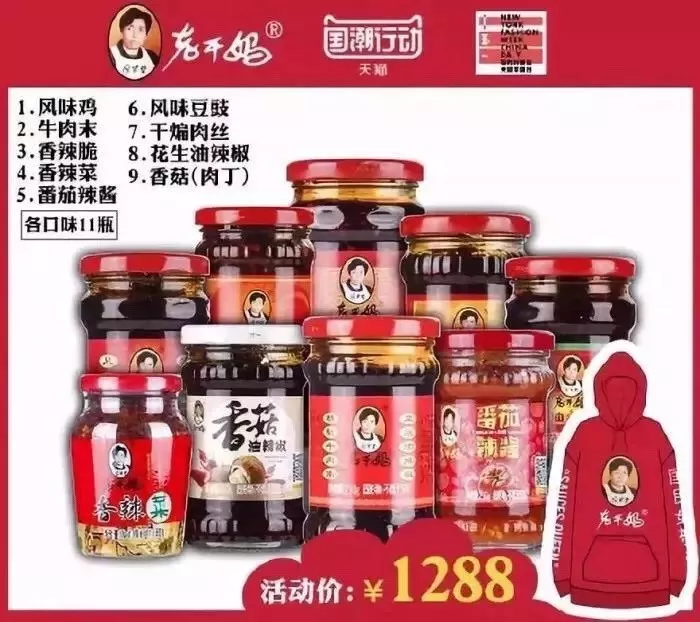 The Chinese economic magazine Cyzone (创业邦) has identified the six Chinese heritage brands with higher sales potential, in China and globally. A surge of nationalism and nostalgia, a taste for crossover products: the Chinese do not seem to be willing to abandon the brands that are part of their history. At the third place, Laoganma (老干妈) chili sauce had its moment of international glory at the New York fashion week.

Affordable, giving flavour to a bowl of rice, the Laoganma (老干妈, old goldmother) chili sauce reminds many Chinese of their student years. Launched in the 1990s by Tao Huabi (陶华碧), a modest cook from Guizhou province, the brand enriches the ‘China Dream’ narrative.

Laoganma briefly came out of the sauce department when fashion brand Opening Ceremony, founded in 2002 by Asian Americans Carol Lim and Humberto Leon, printed the brand’s effigy on sweatshirts. These were presented at the 2018 New York Fashion Week, the same one that welcomed the arrival of Chinese sports brand Li Ning in the edgy fashion sphere.

The ‘old godmother’s trip to New York has been widely commented on Chinese social media, especially Weibo. A video from the state-run news agency Xinhua has been viewed more than 5 million times, Cyzone reports. According to the magazine, Laoganma sweatshirts were the best-selling items at Tmall China Day, an operation organized by Alibaba Group’s ecommerce platform in partnership with New York Fashion Week to promote Chinese fashion and brands.

Clouds on the horizon

Laoganma’s sales reached CNY 4.5 billion (US$630 million) in 2016, at a rate of 2 million jars of sauce sold per day, according to Cyzone, which placed it at the third place in its Top 6 Chinese heritage brands. However, a recent article published by the popular Chinese economic information platform Toutiao claims that Laoganma sauces are no longer what they used to be.

It has been said that its taste, in particular, has changed and consumers feel a bit lost. Competition is also getting fiercer every day. The author of the article even wonders if the company will survive the departure of its founder Tao Huabi, recently retired. For, he says, relying on a popular Chinese saying, ‘if starting a business is difficult, keeping it afloat is even more so.’

Five reasons why Marie Dalgar could become a global brand