Relying heavily on imports and continuously pressured by a steadily growing demand, the Chinese carbon fibre industrial supply chain has to more than double its current production capacity. China’s industrial giants Sinopec and Baowu Steel Group are new contributors to the national effort.

“Carbon fibre was in short supply in China for nearly the whole year 2020.” This concern is expressed by Zhejiang Jinggong Science & Technology (JGST), China conglomerate Jinggong Group’s subsidiary specialized in equipment technology. The company underlines that “as an indispensable new strategic material for China’s economic development and national defence construction, carbon fibre has been in strong demand in wind power generation, aerospace, sports and leisure, and rail transit in recent years.”

Efforts are made by new entrants in the carbon fibre industry such as Chinese state-owned giants Sinopec and Baowu Steel Group (see focuses 1 and 2). According to Sinopec, China’s demand for carbon fibre has been continuously expanding since 2017, reaching 31,000 tons in 2018, up 32% from the previous year. During the same period, imports reached 22,000 tons, up 36.8% from 2017. The country’s demand is expected to exceed 50,000 tons/year by 2025, including 30,000 tons/year of large-tow carbon fibre.

Time is pressing throughout the carbon fibre production chain. Specifically, the shortage of high-end carbon fibre may cause a crisis in the supply of hydrogen storage cylinders, according to the Chinese online newspaper Gaogong Hydrogen.

“At this stage, only a few companies in China, such as Zhongfu Shenying and Weihai Guangwei, can supply high-quality carbon fibre materials above T700 in bulk, and these high-end carbon fibre products have to give priority to meeting military needs”, a senior executive of a domestic hydrogen storage cylinders company said to the newspaper.

Japan’s Toray has always been the largest supplier of carbon fibre materials for hydrogen storage cylinders in China. However, since the beginning of 2021, Toray has reduced the supply of high-end carbon fibre in the domestic market. “If Toray’s carbon fibre supply is not released, coupled with the imbalance in the domestic high-end carbon fibre market supply, many domestic system manufacturers may not be able to get hydrogen storage cylinders in the second half of the year, and they will face the dilemma of “no rice in the pot””, warns the Chinese senior executive.

In terms of equipment, there is still a gap between China and the international first-class level, Zhejiang Jinggong Science & Technology (JGST) summarizes, “especially the core thermal equipment required for carbon fibre production lines such as pre-oxygen furnaces, low-temperature carbonization furnaces and high-temperature carbonization furnaces. (…) According to the current international situation, it is believed that foreign export control on our core areas will exist for a long time, and the independent localization of carbon fibre equipment is imperative.”

Shanghai Petrochemical (SPC), one of China’s largest petrochemical companies and a Sinopec subsidiary, started the construction of a major industrial project in Shanghai. Scheduled to be completed by 2024, the RMB 3.5 billion (€450 million) project will produce 24,000 tons of carbon fibre precursor and 12,000 tons of 48K large-tow carbon fibre.

48K carbon fibre tow products are the most widely used among the large-tow varieties in the Chinese market. The rail transportation, automotive lightweighting, oil and gas, construction, drone and large aircraft sectors are eager to use these large-tow carbon fibre products that still have development potential.

The completion of this investment project will be conducive to meeting the domestic market demand for carbon fibre composite materials and promote the carbon fibre industry’s technological progress. The company will reduce costs and stabilize product quality to enhance product profitability.

“When the project is put into operation, it will change the situation of China relying completely on imports of large-tow carbon for a long time, while giving a strong impetus to the development of the domestic carbon fibre industry and helping Chinese manufacturing”, said Sinopec, SPC’s parent company.

48K large-tow carbon fibre has excellent mechanical properties and high corrosion resistance, its specific gravity is less than a quarter of steel, but its strength is 7 to 9 times that of steel. It is a high-strength new fibre material with broad application prospects that is widely used in aircraft parts, rail transit raw materials, car body manufacturing, etc.

In order to achieve technological breakthroughs, SPC and Shanghai Petrochemical Research Institute, with the support of the city of Shanghai, established partnerships with universities such as Fudan University to conduct collaborative innovation. In 2018, they successfully trial-produced 48K large-tow carbon fibre. As of 2020, Shanghai Petrochemical held a total of 165 carbon fibre-related patents.

“How can we produce steel with higher strength and lower weight? We want to be involved in carbon fibre, aluminium alloy and other new lightweight materials, positioning ourselves as a supplier of integrated material solutions”, said Chen Derong, chairman of state-owned steel giant China Baowu Steel Group in a recent interview broadcast by the CCTV financial channel. Shortly after, he expressed that the carbon fibre industry is a strategic new industry that China Baowu will focus on in the future.

Li Junhai, senior vice president of Baowu Carbon and chairman of Zhejiang Baojing, announced that the company will soon launch a 60,000-ton carbon fibre precursor project with an annual output of 18,000 tons of carbon filament.

Situated 157 km from Shanghai in southern Jiangsu province, Changzhou National High-tech Zone was one of the earliest industrial parks in China to deploy carbon fibre and composite material industrial companies. In recent years, the park introduced and innovated around the advanced carbon material industry, forming a development pattern of “graphene in the south and carbon fibre in the north”.

This article was commissioned and published by JEC Group. 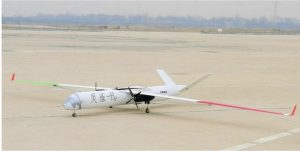 COMAC displays its ambitions in both conventional and green aviation industries
Over the next decades, China will ultimately establish a conventional…
Chinessima