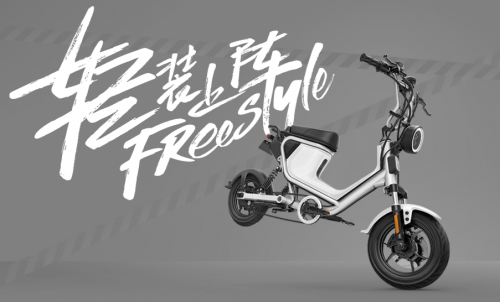 « This is an important step in our journey as we work to build the world’s leading brand in urban mobility », said Li Yan, Niu’s CEO, when the company joined Nasdaq in October 2018. Niu Technologies (小牛电动科技有限公司) presents itself as « the largest lithium-ion battery-powered electric scooters company in China and a leader in the European market. »

This goal is ambitious for such a young company, founded in 2014 by two former Baidu (major Chinese search engine) and Huawei executives. The brand already boasts about having sold 400,000 e-scooters and having collaborated with partners such as Bosch (for engines), Panasonic (lithium-ion batteries) and Vodafone (SIM card and dedicated mobile application).

News articles about the Chinese start-up have been numerous lately. According to the South China Morning Post, Niu is preparing to enter the US market. For its part, People’s Daily is interested in the arrival of the Niu e-scooters on the Korean market, where Chinese electric car brands already occupy a special place, says the Chinese state-run newspaper. Malaysian news website Star Online covers the opening of the first Niu flagship store in George Town, Malaysia.

In France, Numerama, a website specializing in new technologies presents the latest model U-Pro, available « in 130 stores », according to Niu. Numerama, who had not really been won over by the previous model Niu N1s launched in 2017, notes that the brand has since made efforts in terms of connectivity: « Niu has added a new security system. If the scooter is moved without having been unlocked before, the rear wheel locks, an alarm is triggered and a message is sent to the owner. As for unlocking precisely, it can be done via the owner’s smartphone up to 50 meters from the scooter. »

However, in the absence of regulations encouraging a switch towards all-electric urban mobility, apart from a few models and electric scooters sharing companies, the French market is currently not very developed.

According to the market intelligence and consulting firm, China electric scooters and motorcycles market size stood at US$7.7 billion in 2017 and is projected to reach US$12.5 billion by 2025, at a CAGR of 6.1% during the forecast period. « The market is still expected to grow in medium to long term driven by growing urbanization and rising environmental awareness», asserts the firm. Also, « electric two-wheelers have been commonly used in China for short trips such as going to work, leaving children to schools etc. However, over the last few years electric two-wheelers are being increasingly used by services industry for delivery purposes. »

Niu’s CEO, Li Yan, said to South China Morning Post that new regulations in China to accelerate the adoption of electric scooters will come into effect on April 15. Will other countries follow this path ?

China is taking the leadership in the offshore wind market