The Chinese economic magazine Cyzone (创业邦) has identified the six Chinese heritage brands with higher sales potential, in China and globally. A surge of nationalism and nostalgia, a taste for crossover products: the Chinese do not seem to be willing to abandon the brands that are part of their history. Ranked fifth, Liushen Florida Water (六神花露水), a brand of the century-old Chinese cosmetics group Jahwa (上海家化), took a breath of fresh air by partnering with cocktail and restaurant brands.

Is it a toilet water, an aftershave, a muscle relaxant? Liushen Florida Water (六神花露水), with its strong mint smell and its properties derived from ingredients used in traditional Chinese medicine, according to the brand, has become a household necessity in China as a mosquito repellent.

Founded in 1990 by the Chinese cosmetics group Jahwa (上海家化), the brand generates an annual turnover of CNY 1.7 billion (US$ 250 million), says the Chinese economic magazine Cyzone (创业邦) which ranked it 5th in its Top 6 of Chinese Heritage Brands.

The Liushen brand team within the Jahwa group explained in the Chinese press that the period from the end of May to the beginning of June being ideal for enjoying crawfish, they began to develop flavors for several months previously with the restaurant Huxiaopang.

« Youth cannot be claimed in a slogan. The brand must be involved in young people’s lives in a multidimensional way and create unforgettable experiences », Liushen added.

This foray into the field of beverages is not new to the brand. Last summer, Liushen made the bet to partner with a fellow Chinese cocktail brand, RIO (锐澳鸡尾酒). This brand founded in 2003 claims to be the one that launched the trend of preset cocktails in China, to the point of being known today in 200 Chinese cities.

The idea of drinking a liquid whose brand is associated with a mosquito repellent as a refreshing cocktail was obviously not prohibitive since in June 2018, 17,000 bottles of ‘Liushen-flavored RIO cocktail’ were sold in just 17 seconds, in a Chinese spirits industry yet ultra-competitive, reports Cyzone.

Have RIO Liushen cocktails only relied on the clash of the two brands to stimualte consumers’ curiosity – and thirst? Not really. « To play the crossover game thoroughly, marketing must not only rely on the ‘chemical reaction’ between the two brands, but also on the ‘superposition of reactions’ », according to Cyzone.

The two parties first analyzed separately the ‘cocktail RIO’ and ‘Liushen floral water’ fan groups. Then through the digital marketing platform specializing in data processing AliMama (阿里妈妈, a subsidiary of the Alibaba group), a large-scale advertising campaign was carried out to reach both targets.

At the end of this first round, the purchasing behaviors were again scrutinized, then differentiated and the target groups were refined. It was then time to carry out a second promotional campaign, even more accurate, relayed on the microblogging site Weibo.

« Ultimately, 92 % of the purchases of Liushen-flavored RIO cocktails were made by new customers of the two brands », says Cyzone. According to the magazine, in addition to substantial sales and public attention, this crossover launch has allowed both brands to accumulate a large amount of data they can use to plan their future operations. 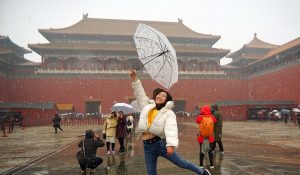