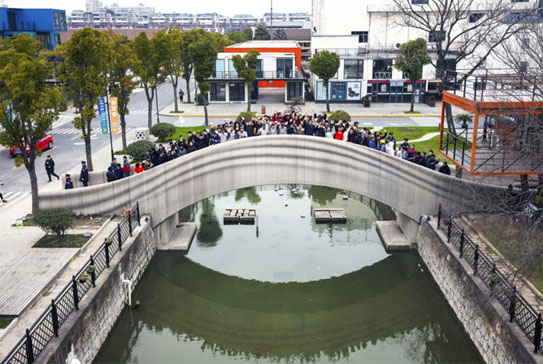 The urgent need to address the challenges of climate change and China’s rapid urbanization involves both the private and public sectors. Projects are developed on the local scale but also planned nationally.

In December 2018, a 15m-long 3D-printed bridge made from composite materials was open to pedestrians in Taopu Park in Shanghai. The bridge benefited from 3D printing technology developed by the state-owned Shanghai Construction Group.

« What is special about this bridge is its disruptive innovation in terms of materials and construction processes », explains Chen Xiaoming, deputy chief engineer of Shanghai Construction Group, adding that the choice of materials was key. After many comparisons and tests, the construction team finally selected a material with a certain proportion of glass fibre added in ASA (an engineering plastic), as well as anti-ageing materials, so that the bridge has high weather resistance and high impact strength. It can withstand long-term sun and rain, while meeting the requirements of 3D printing materials and building materials. The group ensured that the bridge’s strength and durability are in line with national construction industry standards.

« The bridge has a service life of up to 30 years. It can carry 250 kg per square metre, equivalent to a minimum of 4 adults per square metre passing by at the same time », Chen Xiaoming says.

3D printing is not only a new way of building, but also a subversion of the traditional architectural model, says the Shanghai Construction Group in a press release. « In the bridge 3D printing site, the printing robot left the scene clean and tidy, without dust or construction waste. In addition to the reduction of human costs and the promotion of green construction, the entire bridge printing process only took less than 40 days: intelligent construction has made a big leap ahead in terms of speed. »

The bridge is constructed of 44 hollowed-out 3D-printed concrete units, while the handrails are divided into 68 units. The bridge’s components were printed from composite materials containing polyethylene fibre concrete to match the structural performance of conventional materials.

The design process involved the construction of a 1:4 scale physical model of the bridge, built to demonstrate the scheme’s viability and proving that the bridge could hold pedestrians crowding the entire surface. For the actual construction, concrete components for the bridge were printed by two robotic arms, over the course of 450 hours. The streamlined process is estimated to have produced savings of 33% when compared to a more conventional construction process – attributed mainly to the elimination of templates and reinforcing bars, according to information website ArchDaily.

Facing rapid urbanization, China enthusiastically embraced the concept of “sponge cities”, a reimagination of the urban environment where almost every raindrop is captured, controlled and reused.

The Chinese government has already chosen 16 pilot cities, including Wuhan, Chongqing and Xiamen, and allocated 400 to 600 million yuan to each of them for the implementation of innovative water management strategies that would gradually transform these cities into “sponge cities”.

In June 2015, the Gui’an New Area, in Guizhou province, was approved by the state to become one of the 16 pilot areas for China’s sponge city initiative, which aims to build natural systems in urban areas for mitigating rainwater runoff and replenish groundwater through the use of permeable surfaces and dedicated infrastructure.

Construction works were first launched over an area of 19.55 square kilometres. The final plan is to make the entire 1,795 km² area capable of absorbing and reusing rainwater in order to remedy urban flooding, save water resources and protect the local ecological system.

So far, 75 projects are underway to build roads, parks and water treatment facilities with permeable materials. The expected investment is about CNY 6.9 billion (US$1.05 billion), according to the Guizhou province’s official data.

Meanwhile, the Area has installed 70 monitoring devices to collect operational data from the sponge city facilities, including rainfall utilization, water levels and river system data. The information platform will manage and analyze the monitored data to predict potential environmental hazards.

« For the construction of Gui’an New Area’s main road, New Era avenue, a variety of new processes and technologies were also designed », Xu Dezhi, an engineer at Gui’an New District Development and Investment, explained to a local newspaper. The rainwater inspection well is transformed into a composite overflow well, and the system and sponge facilities are effectively combined to ensure that the well cover meets the strength requirements, but also enhances the landscape effect. In addition, New Era avenue also uses composite materials and pebbles in a rainwater filtration pool.

Chinese eco-cities: will the utopia finally become a reality?

Beyond water management, on a national level, China’s central authorities approved in 2017 a master plan for Xiong’an New Area, near Beijing, in central Hebei province, reiterating that its creation will carry « lasting importance for the millennium to come. »

As a testing ground for green urbanization, the government vowed that Xiong’an’s population will not outgrow the existing resources to support it. The city will be powered by “clean electricity”, which in China does not exclude natural gas, according to specialized website Chinadialogue. However, at least half of the city’s power is expected to come from renewable sources.

More specifically, Xiong’an will be the first test case of the Chinese leadership’s ecological vision being applied to a mega-city, in which everything needs to be built from scratch in what was previously an economic backwater of Beijing.

Companies related to Xiong’an New Area include Hubei Huitian New Materials as well as Kuang-Chi Group, a new material manufacturing company based in Shenzhen, Guangdong province. The company signed a strategic cooperation agreement with Xiong’an New Area to promote the research and development of new materials and the integration of military and civilian life in the new area.

China has a long story of green cities experiments. The first Chinese eco-city, Yichun city in Jiangxi province, goes back as far as 1986. The projects that followed were locally-developed programmes with mixed results. According to Southern newspaper Nanfangzhoumo, they gave foreign companies the opportunity to carry out tests without being accountable.

For nationally-driven Xiong’an, Chinese and foreign observers are more optimistic. Yet, according to Chinadialogue, the unique political support, as well as the subsequent resources and expertise it brought, may end up making Xiong’an an exceptional case that proves hard to reproduce elsewhere.

This article was commissioned by JEC Group and published in JEC Composites Magazine’s Special Edition on Smarter Cities. 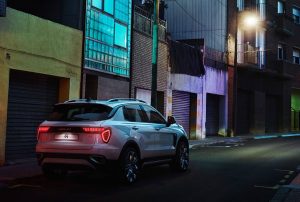