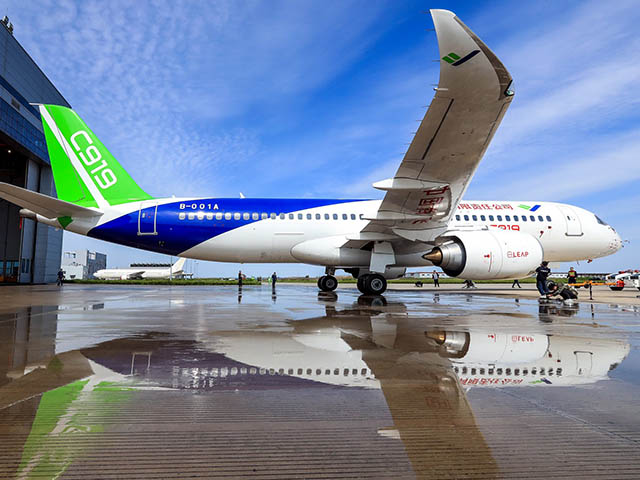 The wide-body Sino-Russian CR929 is not the only aircraft that China’s COMAC wants to use to challenge the Airbus-Boeing duopoly. With the medium-haul C919, the competition on the rising regional flight market will begin sooner than on the long-flights market.

About exactly when the celebration of the 70th anniversary of the People’s Republic of China was held last October in Beijing, Commercial Aircraft Corporation of China, Ltd. (COMAC) had a commencement ceremony and mobilization meeting on the first batch production of the C919 programme.

The production of the parts and components for the first C919 aircraft, such as the centre lower panel of the outer wing section, commenced in the factory buildings at Xi’an, Shanghai and Chengdu. According to state-owned COMAC, this marks a substantial progress in the parallel development of the flight tests and batch production of the C919.

Developing and producing a trunk liner that is safe, reliable and competitive in the market involves extremely complicated system engineering. After its maiden flight on 5 May 2017, the C919 aircraft officially entered the flight test phase. So far, four test aircraft carried out flight tests in Shanghai, Xi’an, Dongying and Nanchang.

With its narrow body, the C919 will be able to carry 156 to 168 passengers in a normal operating configuration. It will be significantly larger than the ARJ21, the first aircraft designed by COMAC (the 15th one has just been delivered to Chengdu Airlines), which is an all economy-class cabin configuration and has seats for 90 passengers. However, the C919 will be smaller than the CR929, a long-range, 250-320-seat wide-body plane jointly developed by COMAC and Russia’s United Aircraft Corporation, whose production is not scheduled to start before 2023.

Less publicized than the Sino-Russian CR929, the medium-haul C919 is positioned on a booming regional market. In its 2019 China Civil Aviation Market Outlook report, Boeing predicts that by 2038, China will need 5,960 new single-aisle aircraft as the main aircraft on domestic and regional routes, accounting for 74% of all deliveries. Demand for wide-body aircraft will also be as high as 1,780, which will triple the size of China’s wide-body fleet.

According to the report, China’s fast-growing e-commerce and express delivery market will make air cargo an important growth driver, with demand for 230 new and 500 modified cargo aircraft over the same period. Overall, it predicts that China will need 8,090 new aircraft worth US$1.3 trillion over the next 20 years, as well as US$1.6 trillion worth of air services to meet its 6% annual growth in air traffic. This year’s forecast is up 7% from 2018.

« China is one of the most dynamic and fastest growing markets in the world », said Randy Tinseth, Boeing’s vice president, Commercial Sales & Marketing, during the report presentation in Beijing. « The growing number of middle-income people, strong investment in infrastructure, and advanced technology to make airplanes more comfortable and efficient continue to drive the huge demand for air travel. »

On these highly competitive, technology- and safety-driven markets, certification is key, as COMAC also intends to export the C919 as well as the prospective CR929. Certification of the C919 aircraft by the Chinese Civil Aviation Administration (CAAC) has been postponed to 2021, as the company’s vice president Wu Guanghi told state-owned Xinhua agency.

The US$ 7 million, 2800 m² laboratory will bring capability, capacity and expertise to the large aerospace manufacturers and their supply chains based in the region. The facility will also provide testing services to the local oil & gas, transportation, power generation and medical device markets.

« The Chinese aerospace industry is going through rapid growth and this investment is a direct response to our customers’ needs for destructive testing services, for metals and composite materials, that will be used on the current and future generations of aircraft developed in the region », Rick Sluiters, executive vice-president for aerospace at Element, commented.

Element’s support of the Chinese aerospace sector is not new, having recently delivered a year-long project to investigate the hydrodynamic behaviour of the C919 aircraft at the Element Warwick laboratory in the UK.

« This work will continue in the new state-of-the-art laboratory in Shanghai – the site puts us closer to the client and brings efficiencies in time and work », says Wendy Cai, China sales director and deputy general manager of the Shanghai Laboratory at Element. The company will also perform tests on other Chinese aircraft such as the ARJ21 and the upcoming CR929.

To arrive faster on the market, the C919 is not 100% China made, as Western media disclosed. According to them, Safran and General Electric supply the same LEAP engine that equips the Airbus A320 and Boeing B737, while German Liebherr provides the landing gear.

The main sections of the C919’s airframe structure are designed independently by COMAC, manufactured by Chinese companies, including AVIC Xi’an Aircraft Industry (Group) Co., Ltd. (XAC), and assembled by COMAC.

A boon for Chinese manufacturers

« As the largest supplier of airframe structural members for the C919 aircraft, XAC has undertaken the development of the work packages of the C919 mid-fuselage (including the centre wing) and outer wing section, accounting for more than 35% of the whole aircraft structure », says COMAC.

The aviation market growth as a whole appears to be a boon for Chinese manufacturers. « China plays an important role in all Boeing civil aircraft models. More than 10,000 Boeing aircraft flying around the world have installed Chinese-made parts », Boeing specified in its 2019 report.

According to the American corporation, Boeing aircraft are currently the main force of China’s air passenger and cargo system, accounting for more than 50% of China’s civil aviation fleet. Asked if she sees the C919 aircraft as a potential market leader, Wendy Cai answers that « this seems unlikely in the short term (i.e. within the next 10 years) as COMAC is still some way off the capacity and capability of firms such as Boeing or Airbus. » 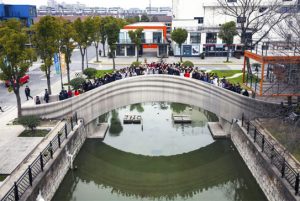