An electric two-seater with strong lines and a top speed of 313 km/h was on show at the Shanghai Auto Show in June 2017. It was created by NIO, a Chinese-Western hybrid with bases in Shanghai, London and the Silicon Valley.

NIO is part of a wave of fledgling automakers, including Detroit Electric, Qiantu Motor, Thunder Power and NEVS – all backed at least in part by Chinese investors – that are aiming to compete with Europe, the USA and Japan by offering top speeds over 240 km/h and features including carbon fibre bodies and web-linked navigation and entertainment.

With investors such as Chinese tech giant Tencent Holdings and computer maker Lenovo Group, NIO recently developed partnerships with KDX Group in many areas including products, technologies and funds. At the start of KDX Group’s new carbon fibre project in Changzhou, NIO Vice President Zhong Wanli declared that “the new plant will greatly enhance the depth of cooperation between the two sides. In June 2017, NIO and KDX Group signed a purchase agreement for mass-produced carbon fibre automotive parts for smart electric vehicles worth more than CNY1 billion (US$ 155 million). The construction of additional KDX Group factories in East China is very good news as it will shorten the distances between us and facilitate cooperation. It will enable us to work together to promote large-scale applications of carbon fibre in the field of new-energy vehicles.” 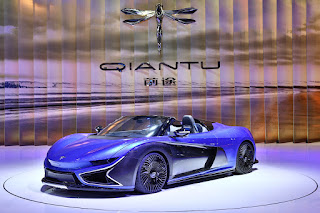 Unlike NIO, which has no sales plans and is taking bespoke orders, Qiantu Motor (Qiantu means Future in Chinese), a wholly-owned subsidiary of Beijing CH-Auto Technology Co., plans to invest more than CNY 2 billion (US$ 300 million) in the first phase to produce up to 50,000 units of its K50 electric sports car annually in its Suzhou manufacturing base, near Shanghai.

“Different from the manufacturing process of traditional vehicles that focuses on pressing, welding, painting and the general assembly process, the Suzhou manufacturing base will take advantage of lightweight materials”, said Qiantu Motors Chairman Lu Qun during the New Energy Vehicles Show in October 2017 in Beijing, as reported by the Chinese economic newspaper Caijing. Through a large number of experiments and innovations, Qiantu Motor will be the first to introduce carbon fibre on a large-scale in vehicle mass production in China and as a result, the K50’s 29 carbon fibre panels only weigh 46 kg.”

The first K50 models will be launched on the Chinese market in June 2018 and, although no prices have been announced yet, Lu Qun said he wanted more middle-class and mainstream consumers to enjoy electric sports cars.

This article has been commissioned and published by JEC Composites Group 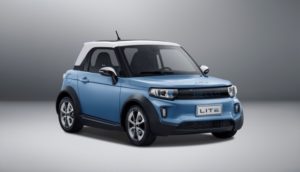 Driving the whole car supply chain, electric vehicles are in full swing
Beijing forecasts that China will be able to produce two…
Chinessima