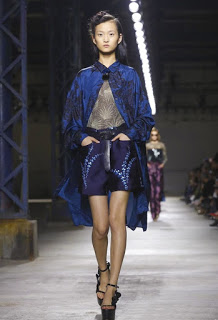 How did the Chinese media cover the Parisian fashion shows ? Which brands did draw attention, which shows did stand out from the crowd ?

Many articles are interested in the Chinese stars who attend the fashion shows. Many reports examine their outfits, as published in the women’s pages of Nanfang Wang, the website of the South China largest media group. « In the margins of fashion shows, a crucial phase of the battle is taking place, beauty is now all about general appearance”, says an article which identified the brands worn by actresses Maggie Cheung (Louis Vuitton) and Yang Mi (Chloe and Valentino), top model Liu Wen (Chanel, Tory Burch) as well as the androgynous actress and singer also known as Chris Lee, Li Yuchun (Givenchy).

Streetstyle photos, often highly entertaining during the fashion weeks, also raise interest among Chinese media, like Vogue China, which publishes daily photos of looks outside the parades. The Asian stars are less the center of attention, as evidenced the photos of Aymeline Valade or Caroline de Maigret highlighted in the lifestyle pages of the economic and financialmagazine Caijing, based in Beijing. Similarly, the web portal Sina, a major Chinese information portal, reviews details of the attires of streetstyle stars – and Instagram stars – Chiara Ferragni, Anna Dello Russo, Elena Perminova, and Miroslava Duma while warning : « If you do not know these people, don’t say that you understand anything aout fashion.»

And what about the fashion shows, did they attract attention ? An article posted on Sohu, another massively viewed information portal, observes the emergence of a new generation of Chinese models on the catwalks this season. According to the article, this “dream team” follows in the footsteps of the young Wang Xinyu (16 year-old), winner in 2014 of the models New Face in China competition, who has worked this season for many brands, such as Hermès, Dries Van Noten, or Dior. As fashion is concerned, the website specialized in high-end lifestyle Hualizhi (luxe.co) puts forward “10Parisian brands whose collections were of interest”, while announcing in the preamble that this ranking, dominated by Louis Vuitton, Dries Van Noten and Loewe, corresponds to the verdict of the British newspaper The Guardian.

Fashion review is not absent from the reports yet, as demonstrated by an editorial on ifeng, the website of the powerful Chinese media Phoenix Group which reacts to Demna Gvasalia appointment as Artistic Director of Balenciaga. Entitled “These young avant-garde fashion designers to follow”, it analyses the “new territories of luxury” invested by some very young brands « that fall outside of the homogeneity of current fashion, without trying to seduce in the traditional way », such as Vêtements, co-founded by Demna Gvasalia. Quoting the Georgian designer stating that «the greatest luxury is time», the author believes that these brands are the common thread between street fashion and high-end customized fashion.

Demna Gvasalia was also the subject of a very detailed portrait published by XinHua agency, the Chinese first national press agency. « For what reasons was this outsider preferred to three other well-known designers? », asks the article. Its ability to rapidly develop its own brand « which demonstrates a thorough understanding of the speedy evolution of the sector »,  is one of the reasons cited. The article recalls that the last Vêtements fashion show took place in the Chinese restaurant Le Président, in the Belleville district in Paris, and that choosing a Chinese name for the brand, Weitemeng (literally unique and special bud) is evidence of a certain desire for expansion.