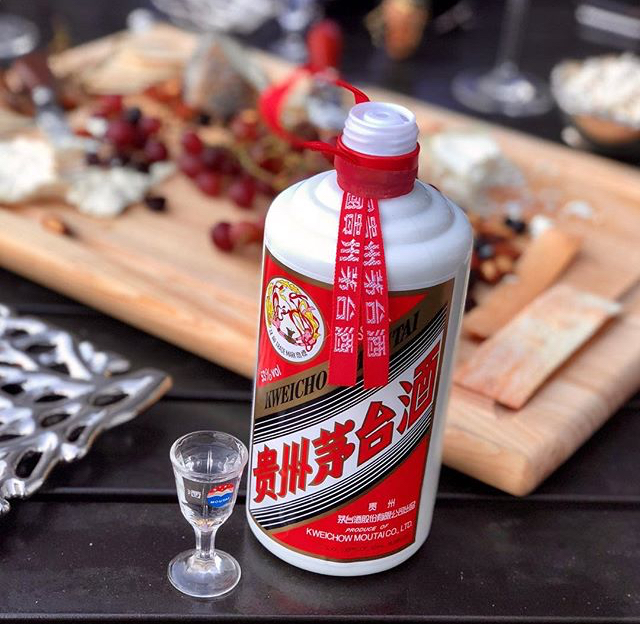 Moutai is ranked 2nd in the Futurebrand Index 2018. Jon Tipple, Futurebrand’s Chief Strategy Director, believes that the Chinese baijiu brand is at the start of its internationalisation phase.

Chinese giant Kweichow Moutai (贵州 茅台) made a sensational debut in the Futurebrand Index. The brand was the second best perceived in terms of « potential » among an « informed and influential public » surveyed in 18 countries, including China. This ranking, established every two years by the London-based brand consultancy Futurebrand, limits its scope to the Global Top 100 companies by market capitalization according to the firm PwC.

« The Chinese respondents are less excited about Moutai than respondents in Europe and America. In China, Moutai is familiar and has been around for a long time », says Jon Tipple, Futurebrand’s Chief Strategy Director, in an exclusive interview with Chinessima. This may seem surprising because the brand is little known outside of China, where it dominates the market of baijiu (白酒, white liquor  mostly made from sorghum, which contains as much as 53 percent alcohol by volume) in terms of notoriety, prestige, and revenue (CNY 60 billion, US$ 8,6 billion in 2017).

Smaller competitor Luzhou Laojiao (泸州老窖) seems more ambitious internationally. It was the only Chinese brand of baijiu to participate in the 2018 FIFA World Cup. Already in 2013, the company organized a tasting of baijiu at the Louvre in Paris. A French cognac producer was invited to comment on the brand’s latest product. 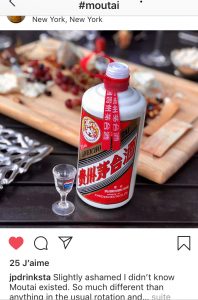 However, on Instagram, the hashtag Moutai brings together 7,560 publications (vastly outperforming #Luzhoulaojiao), mostly from Chinese or Asians baijiu enthousiasts, but also from Westerners discovering the brand. « Slightly ashamed I didn’t know Moutai existed », says a New York instagrammer who presents himself as a whiskey fan. « So much different than anything in the usual rotation and quite interesting. »

« Moutai is creating experiences, rituals. What I understand from our research is that the brand is creating a whole world to enjoy as opposed to a drink to enjoy. It is borrowing some of the codes that exist in high-end spirits, in luxury experiences more generally, and bring them into the baijiu space », explains Jon Tipple. According to him, consumers are looking for new experiences to share and anything that is connoted with a Chinese view of life has a lot of « social cachet.»

The very high price of Moutai (at least US$ 350 for a 500 milliliter bottle), whose base liquor requires several fermentations and distillations and then must be aged for four years before being put on sale, is also « part of the story. » « It’s an indicator of quality for the people that are discovering Moutai or baijiu generally, says Jon Tipple. When you don’t know what you are tasting, you potentially appreciate it a bit more when you know it is pricey. »

A key part of Chinese social life, baijiu Moutai is one of the luxurious gifts often offered to business clients and officials. As such, Moutai was among the brands targeted by the anti-corruption campaign initiated by the Chinese government in the early 2010’s. This may explain why the Chinese media have hardly commented this arrival of Moutai in the Futurebrand index 2018. They preferred to highlight the rising of financial brands, especially Ping An Group. Already present in the previous rankings, the Chinese financial group reached the 7th position after gaining 10 places.

« Moutai is back, the potential is huge if the brand is successful in creating a clear sense of purpose and giving people experiences », says Jon Tipple, who finds that « to be big and not well known is exciting. » To Bloomberg, Maotai presents a « supply deficit » : « After President Xi Jinping’s 2013 anti-corruption drive, management slashed base-liquor production, leaving millions of consumers today thirsty for a dwindling stockpile. »

Moutai’s chairman,  Yuan Renguo, said in an interview that he intended to introduce more ultra-premium and customized products that capitalize on the Moutai brand. « Two thousand years ago, the Chinese calling card was lions, 1,000 years ago it was Chinese porcelain, 500 years ago it was tea leaves and now it’s local brands with their own intellectual property », he said. « I believe Moutai is one of these. » 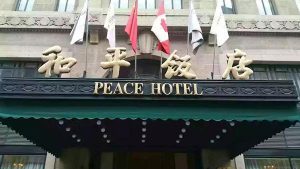